Rhodes marina is located at the island of Rhodes next to the island’s Central Port and only 14 km away from the Rhodes International Airport. Rhodes is the largest of the Dodecanese islands at the Aegean Sea, one of the best sailing & cruising areas in Europe and has been rated among the top ten vacation destinations Worldwide, with approximately 3.000.000 tourists per year.
The island of Rhodes is situated in the South Eastern part of the Aegean Sea some 260 nautical miles from Piraeus (Athens main Port) and approximately 10 nautical miles southwest of Turkey.

The marina features approximately 600 berths and accommodates a wide range of yachts from 30ft to 200ft and could host a boat up to 600ft. An extended fibber optic network provides each berth with tv, telephone, internet and remote control monitoring of electrical and water consumption. All the Marina Area is covered with wifi Internet. Security is provided through the use of a CCTV system.
Most of the docking area is also protected through an access control system. The entire Marina Area is also equipped with a public address system.

The Marina, which is constantly developing, consists of a total of 120.000 sq.m. land area. Rhodes Marine with its 600 meters waterfront esplanade lined with fine dining and shopping venues offers a cosmopolitan environment for yacht owners.

Those who hope to get a mooring place in the town port of Rhodes during the high season, are looking for a needle in a haystack. However, Rhodes marina is a great place to start your Mediterranean adventure, among the Dodecanse islands or even the Turkish coast.

Mooring your boat in this marina is a real privilege since the Rhodos Mandraki marina is actually the old town harbor. Now if you remember your history, the entrance of the old harbor of Rhodos is said to have been guarded by the Colossus, one of the 7 wonders of the ancient world. Sadly, the Colossus is long gone but the Yacht Charter sailors can still enjoy that ancient mystique in a modern setting.

The marina is located in the north part of Rhodos island, along the other ports of the old town, being the furthest to the north, with the coordinates 36°26′ N 28°14′ E. From out at sea, the marina is easy to spot thanks to the medieval castle that sits just above it on a hill. Also, opposite the marina, the Yacht Charter skipper can see the main market street.

The fact that the Mandraki marina is actually the old town port means that it’s not going to offer the facilities of a modern private marina, but regardless of that fact, it seems to be very popular with the Yacht Charter crowds, especially during the summer months when a berth at this marina is very hard to come by.

A reason for that could be the position of the Rhodes island and the Rhodea town in particular, a gateway to the Dodecanese island and even the shores of Turkey. Also, the marina is conveniently situated just 30 minutes from the airport by car and 20 minutes from the commercial ferry by foot. This connects with numerous Yacht Charter islands in Greece and with resorts in Turkey, such as Marmaris.

Also, during the summer, the prevailing wind in the area is the Meltemi which blows from the northwest to the west with forces of 4-6 Beaufort causing some problems for Yacht Charter yachts. North of the port entrance there are rocks and shallow waters that should be avoided.

The marina has 120 berths which are never enough during the summer months, a reason for which a booking in advance would be a good idea. Berths have water and power supply (220V) as well as the basic facilities of toilets, hot water showers, a mini market and grocery shops, a parking lot and a taxi stand for those Yacht Charter sailors with a trip around town in mind.

Other than the fact that it gets busy during the summer time, the fact that the facilties here are pretty basic, Mandraki marina is really a great place to moor, since the ancient town of Rhodes is a starting point for many Yacht Charter itineraries in the Mediterranean.

Colossus history: The island of Rhodes was an important economic center in the ancient world. It is located off the southwestern tip of Asia Minor where the Aegean Sea meets the Mediterranean. The … END_OF_DOCUMENT_TOKEN_TO_BE_REPLACED

RHODES AQUARIUM: The building of the Hydrobiological Station of Rhodos was built during the period 1934-36. In 1937, under Italian rule, it operated as the Reale Istituto di Ricerce Biologiche di … END_OF_DOCUMENT_TOKEN_TO_BE_REPLACED

The beautiful town of Rhodes (New Town), the capital town of the island and of the Dodecanese Prefecture, is situated at the northern end of the island. It is not only the wonderful monuments, the … END_OF_DOCUMENT_TOKEN_TO_BE_REPLACED

The medieval town of Rhodes (Old Town), is surrounded and defined by big walls which used to protect it and which actually are preserved in very good condition. The walls have a length of some 5 … END_OF_DOCUMENT_TOKEN_TO_BE_REPLACED

The museums in Rhodes Town and Old Town: The Municipal Art Gallery of Rhodes Exhibition in the Palace of the Grand Master The Archaeological Museum of Rhodes Aquarium / Hydrobiological … END_OF_DOCUMENT_TOKEN_TO_BE_REPLACED

History: The island of Rhodes is located at the crossroads of two major sea routes of the Mediterranean between the Aegean Sea and the coast of the Middle East, as well as Cyprus and Egypt. The … END_OF_DOCUMENT_TOKEN_TO_BE_REPLACED

The island of Rhodes is famous for its nightlife because it is a very cosmopolitan place and has every thing to offer in terms of entertainment. Sophisticated clubs, bars, casino and huge nightclubs … END_OF_DOCUMENT_TOKEN_TO_BE_REPLACED 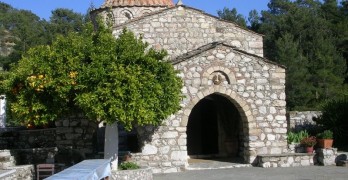 Rhodes marina is located at the island of Rhodes next to the island’s Central Port and only 14 km away from the Rhodes International Airport. Rhodes is the largest of the Dodecanese islands at the … END_OF_DOCUMENT_TOKEN_TO_BE_REPLACED

Shops Market in Rhodes island: Rhodes is a paradise for shopping lovers! There is plethora of shops in the New City of Rhodes and in the Medieval Town. Perhaps there is no other place in the world … END_OF_DOCUMENT_TOKEN_TO_BE_REPLACED

Rhodes island weather: The climate of Rhodes is a mild Mediterranean climate characterised by sunny and dry summers and mild winters. Refreshing breezes and winds are blowing during the months of … END_OF_DOCUMENT_TOKEN_TO_BE_REPLACED